As South Asia experiences rapid and unprecedented transformation, both scholarly and public interest in the region has grown dramatically in recent years. A large new generation of graduate students working on South Asia in the humanities and social sciences is in the process of rethinking approaches to the study of South Asian culture, society, politics, economics, law, history, literature, and the arts. South Asia by the Bay’s first graduate-student conference held at Stanford University last year was a resounding success yielding many important conversations and discussions. 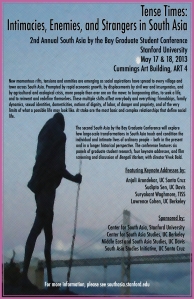 The past decade has been a time of profound transformation across South Asia. Popular democracy has deepened in Nepal and Bangladesh; the end of civil war in Sri Lanka has ushered in a period of rapid development and triumphant majoritarianism; Pakistan is living through its deepest political crisis ever. In India a long economic boom generated talk of a new era where the weight of the colonial past, the heavy presence of the postcolonial state, and entrenched conflicts of the past would give way to a new, more global and perhaps more liberal present. Yet, under such breezy talk of a new epoch, it is clear that the tacit social contract of the postcolonial era – between individuals, families and communities, between communities and the state, and so on – no longer provides a self-evident ground for social life.New momentous rifts, tensions and enmities are emerging as social aspirations have spread to every village and town across South Asia. Prompted by rapid economic growth, by displacements by civil war and insurgencies, and by agricultural and ecological crisis, more people than ever are on the move: to burgeoning cities, to seek a life, and to reinvent and redefine themselves. These multiple shifts affect everybody and everything: friendships, family dynamics, sexual identities, domesticities, notions of dignity, of labor, of danger and propriety, and of the very limits of what a possible life may look like. At stake are the most basic and complex relationships that define social life: who are my intimates? Who can I trust? Who can I love, and who must I loathe? How do I deal with, classify, or fear, the strangers that I encounter?

These seismic shifts in the ‘mentality of the governed’ shatter social hierarchies and established truths. They produce tense times. Every rapid transformation casts doubts on the weight, and the virtues, of the past. The past becomes tense, often transformed into a burden of ‘backwardness’ and bigotry. This is evident how many contemporary problems – corruption, violence or misogyny – routinely are framed as modern perversions of older practices and habits.

Similar disavowals took place during earlier moments of rapid change in the region –when emergent anti-colonial nationalism redefined the moral universe in South Asia and invented a new popular politics at the eve of the 20thcentury; or during the time of independence and utopian dreams across the colonial world in the 1940s.

This time, the emergence of a ‘new epoch’ appears to challenge the conventional spatial limits of South Asia. Concerns that are intensely lodged in South Asian cultural and historical spaces immediately generate a global debate, virtual communities and repercussions: a brutal rape in Delhi, anti-corruption protests led by a latter-day Gandhi, war-crimes committed by the Sri Lankan army during the final weeks of the civil war in 2009, to mention a few recent examples.

The second South Asia at the Bay Graduate Conference wishes to explore how large-scale transformations in South Asia touch and condition the individual and intimate lives of ordinary people – both in the present and in a longer historical perspective. We invite submissions from graduate students working in the humanities and social sciences that address the moral, political and epistemological quandaries of current and historical transformations in the region. We encourage submissions that fall within one or more of the subthemes outlined below:

Political Love South Asia has the richest and most diverse and contradictory political scene in the world. Millions of people throw themselves into passionate attachments to both abstract principles and more concrete causes. This rich political world has conventionally been understood through well known cultural and social tropes: asceticism, caste loyalties, honor, fear of pollution, and so on. But what does ‘political love’ do to other, more intimate, attachments and obligations? Can one’s sacrifice for the ‘the people’ still allow for a productive and full life? How can we understand the love of politics, the people, or the community, as forces in their own right beyond mere self-interest?

Caste, Disgust, Attraction Contrary to the expectations of the first post independence generations, rising levels of education and economic development did not make caste and community loyalties less of a factor in social life across South Asia. Instead, caste is today arguably more salient than ever before: in politics, in associational life, in education, in patterns of habitation. Despite unprecedented social heterogeneity in workplaces and institutions there are few signs that caste is ‘melting into air’. Movements promoting inter-caste marriages in the 1960s and 70s seem to have given way to substantialized caste identities and declining numbers of inter-caste unions. Matching agencies and internet dating sites today promise a more precise matching of individuals according to caste and class than ever before. Are patterns of love and intimate attachment less socially emancipated today than they used to be? If so, why?

The “State” of Sexuality The past decade has witnessed a rapid rise in feminist and/or LGBT/queer movements that seek to seize or transform the language of the “state” for liberatory ends.  Such an attachment to a reparative or divisive logic of the “state” is most evident in India, especially after the repeal of statutes such as Section 377.  In the face of contemporary challenges to scholarship and activism promoting a globalizing queer and feminist agenda, one must ask how sexuality, and sexual identities in the broadest sense, relate to the “state”, and to the law of different states? Are key assumptions about freedom, rights and the subject that have driven scholarship and activism in this field being curtailed or enabled by such a focus on the power of states to recognize and authorize certain identities and identity labels?

Friendship at Large With unprecedented scales and numbers of migrants across the length and breadth of South Asia, the questions of alignments, of loyalties, of the paramount importance of community boundaries and morality seem in new flux. In the vast labor pools working in plantations, mines, in the urban slums and peripheries, but also in the mushrooming educational institutions and white-collar work places, the questions of trust and friendship are being renegotiated and expanded on a daily basis. The result does not appear to be the spontaneous growth of proletarian solidarities, as earlier generations of activists and labor historians hoped. Instead we witness flexible segmentation of alliances and civilities, and new enmities and competitions, each of them bound up around specific timeframes and conditions. Are such civilities and enmities still intelligible through our well-known categories of kinship, biraderi, caste and community? Or do we need a new conceptualization of work, of friendship and alliances?

Beauty and Modern Bodies in South Asia The very idea of being ‘modern’ and of living a modern life is historically connected with certain aesthetic forms and regimes: smoothness of appearance, style and character; sartorial individuality; authentic self expression indicating interior depth; uncluttered surroundings that foreground autonomous and self-contained beings and objects; clean, controlled and continent bodies.In South Asia, modernity is indeed strongly articulated around ideals of beauty and appearance – beauty pageants, new public aesthetics in films and advertising, extensive use of beauty products but also a new emphasis on self-presentation in domestic spaces: home décor, consumer goods, brand awareness and so on. How do the modern bodies and public aesthetics in South Asia articulate global and commercially mediated notions of the modern individuality with older cultural frames in the region?

Strangers and Neighbors in South Asian Cities As urban areas grow rapidly across South Asia, the very structure and feel of the urban are also transforming.  New technologies redefine social relationships and make crowds, gatherings and public interactions more selective and structured, enabling more precise and comprehensive forms of social segregation than before. Most fast growing cities in South Asia are new, displaying seemingly chaotic patterns of urban growth that deepen the segmentations along class, community and caste that was the hallmark of the colonial city, while hollowing out the meanings of ‘public space’ and a ‘public sphere’. These developments may ultimately challenge most of the established paradigms in urban theory. It may be timely to ask if the very idea of the modern city is being redefined in South Asia at this time?